All Paths, One Prayer for Standing Rock

Dan Wahpepah and Rabbi David Zaslow have organized a fundraising event in support of the Standing Rock Sioux who are protesting the plan to construct the Dakota Access Pipeline. The event is called “All Paths: One Prayer for Standing Rock.” Dan Wahpepah is a local residential contractor and leader in the non-profit organization, RED, Red Earth Descendants. He is a member of the Ojibe Tribe. Rabbi David Zaslow is the spiritual leader of the Havurah Synagogue.

The event will combine prayer, music, and learning and will take place Satuday evening at 7 PM at the Havurah Synagogue, 185 North Mountain Avenue in Ashland, The event is free and voluntary donations to support the people working with those on the front lines of the Standing Rock movement will be collected. Speakers and musicians include Charly Otter Robe, Ariee Bear Paw, Phoenix Sigalove, Aaron Oretga, Cyrise Beatty Schachter, Devorah Zaslow, Osahana Katranidou, Ashley Noel, and Dagoberto Morales.

Dan Wahpepah says, “We move into a time of a crossroads of prophesies in which the signs all around us are telling us to take action for the healing of our Mother and our Future Generations…It is a great thing, to unite the Nations. We are making relations from Tribe to Tribe, and Tribe to many organizations, establishing a communication network never before seen. The potential of this network is immense.”

Rabbi David Zaslow says, “There should be no conflict between our obligation to Native peoples to be co-guardians of their lands and sacred sites; to the environment; to the planet itself; and for our need for fuels. A balanced solution that has the consent of the Tribes and all people is always possible if we are courageous enough to think creatively and pray to the Creator for solutions. This is an historic moment as 60 tribes have come together peacefully in solidarity with one another, the planet, and the will of the Creator. I stand with them to protect sacred sites, the people the pipeline will impact, and the environment.”

Tax deductible donations can be made to the site set up by Red Earth Descendants at https://www.gofundme.com/standingrockfund 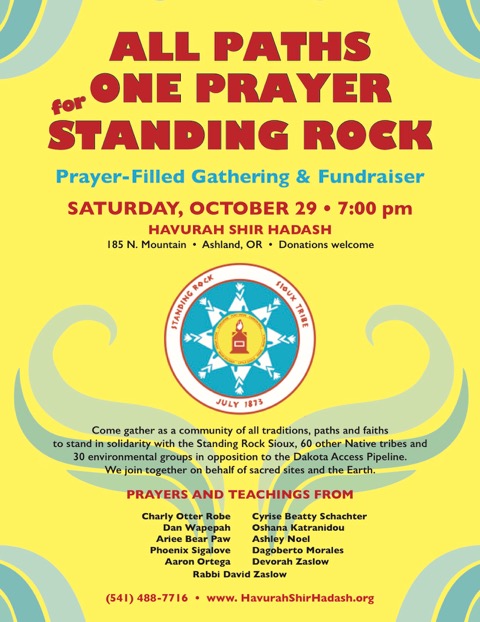