Welcome to WordPress. This is your first post. Edit or delete it, then start blogging!

In poetry, when an innovation in the use of metaphor or rhythm is first discovered, it is called the breakthrough. After a breakthrough there will others who will do the work of interiorization. For instance, in the late nineteenth-century, the British Victorian poet Gerard Manley Hopkins made a breakthrough in the use of alliteration and rhythm. Yet it wasn’t until the mid-twentieth century that Dylan Thomas was able to interiorize the breakthrough made a century before. Until Dylan Thomas, Hopkins was treated as a kind of novelty poet since his brand of alliteration uses consonance and assonance in an aggressive manner – it and takes some getting used to. Here’s how the process of breakthrough and interiorization works.

In the poem called Inversnaid Hopkins wrote: “This darksome burn/ horseback brown/ His rollrock highroad roaring down/ In coop and in comb the fleece of his foam/ Flutes and low to the lake falls home.” Put the poem’s meaning aside for a moment – what a stunning and original use of sound! In Hopkins’ famous The Windhover he wrote “I caught this morning morning’s minion/ kingdom of daylight’s dauphindapple-dawn-drawn Falcon/ in his riding/ of the rolling level underneath him steady air, and striding ….” Along comes Welch poet Dylan Thomas who imitates and develops the novel style that Hopkins created. In his classic A Child’s Christmas in Wales Dylan Thomas writes: “All the Christmases roll down toward the two-tongued sea, like a cold and headlong moon bundling down the sky that was our street; and they stop at the rim of the ice-edged fish-freezing waves, and I plunge my hands in the snow and bring out whatever I can find. In goes my hand into that wool-white bell-tongued ball of holidays resting at the rim of the carol-singing sea, and out come Mrs. Prothero and the firemen.” Beautiful, yes? Can you hear the alliterative connection between these poets? One built upon the work of the other!

The same principle of innovation and emulation is true in religion. In the eighteenth century the Baal Shem Tov made a breakthrough in the Jewish approach to prayer that is still being interiorized today. In the 1960’s Rabbi Zalman Schachter-Shalomi made two breakthroughs that continue to transform the Jewish world. The first had to do with the full empowerment of women. The second had to do with an innovative approach to the relationship between Judaism and other religions. Reb Zalman’s breakthroughs are being interiorized, imitated, and developed in Reform, Reconstructionist, Conservative, and Orthodox synagogues throughout the world. Sadly, Reb Zalman and the Jewish Renewal sometimes don’t not get proper attribution, credit, or financial support for the courageous work that is being done on behalf of Judaism. Our shuls tend to be financially poorer because we have chosen the path of creativity, experimentation, and innovation.

Reb Zalman calls Renewal “the research and development department of Judaism.” From explorations in prayer, chanting, drumming, and liturgy you can see the impact of Reb Zalman’s lifetime work in synagogues everywhere. The Havurah is honored to carry on the breakthrough work of Reb Zalman, especially in the areas of joyful services, education, egalitarianism, and ecumenism. In one of his most popular song lyrics, Steve Allen wrote, “This could be the start of something big.” When it comes to Judaism, you really are part of something big!

Each of the four holy days in our High Holiday season goes deeper and deeper, higher and higher into the hidden realms of the psyche. We begin with Rosh Hashanah, the new moon, and a new year. It is a day of awe as we envision ourselves as being written, God willing, into the Book of Life for a good year ahead. Ten days later it’s Yom Kippur, also a day of awe but on this day the awe is mixed with wonder – we wonder if we will be sealed in the Book of Life for year of health, prosperity, and joy. If we are honest with ourselves we will recognize how fragile our existence on this plane really is, and we simply have to admit that we just don’t know what the year will bring.

The third holy day is really a holy time, seven days of Sukkot, the week of Thanksgiving and the joy of being able to be in community together in our beautiful sukkah. Finally, on Monday evening October 8th. we’ll come together to celebrate Simchat Torah when we’ll read the last words from the book of Deuteronomy and the first words of Genesis and the single breath – all endings and beginnings are connected. The end of one year is the beginning of the next year, the end of one cycle in our lives is the beginning of the next.

Just as Rosh Hashanah marks the time of return, return to ourselves to God, so Yom Kippur marks the time of wonder through an honest assessment of our personal live. We ask ourselves, “have I lived up to my potential this past year?” By the time we get to Sukkot time of return is over, and now it’s the time of being – simply and profoundly accepting ourselves for who we are, knowing that the year ahead is filled with possibility. And when we get to Simchat Torah we hopefully will have arrived at the end of an amazing, awesome inner journey. And what is the end? Joy, simple and magnificent joy. Joy that foretells the good year that lies ahead of us.

The deepest secret is that four  holy days are really one. Awe, wonder, thanksgiving, and joy are all aspects of the singularity, of the One God. On the surface they seem so different like ripples on the sea, but beneath the waves the singularity of the ocean becomes apparent. The season is a movement of return to simple being, and even this movement is part of the greater singularity. There is no being unless there is leaving and returning. There is no joy without the deep, inner work of Yom Kippur which sometimes elicits our deepest and holiest fears and tears.

Judaism is a nature-based faith. Just go outside. There you’ll find the true synagogue. There you will be able to read the true Torah. There you’ll be able to hear the voice of God in every fallen leaf, in every seed ready to crack open to the promise of the spring. As outside, so inside. As above, so below. As you, so me. As us, so God. As nature, so emotion. As spirit, so body. As we chant in the Adon Olam hymn:

וְעִם רוּחִי גְּוִיָּתִי, יהוה לִי וְלֹא אִירָא
As with my spirit my body too. Adonai is with me, I shall not fear.

Each of these four holy days are steps that we take individually and as a community. May we all reached the level of pure and magnificent joy, and come together on Simchat Torah night to dance and chant with the Torah in our arms, saying “L’chaim! To Life.”

A culture of giving sustains our community…. 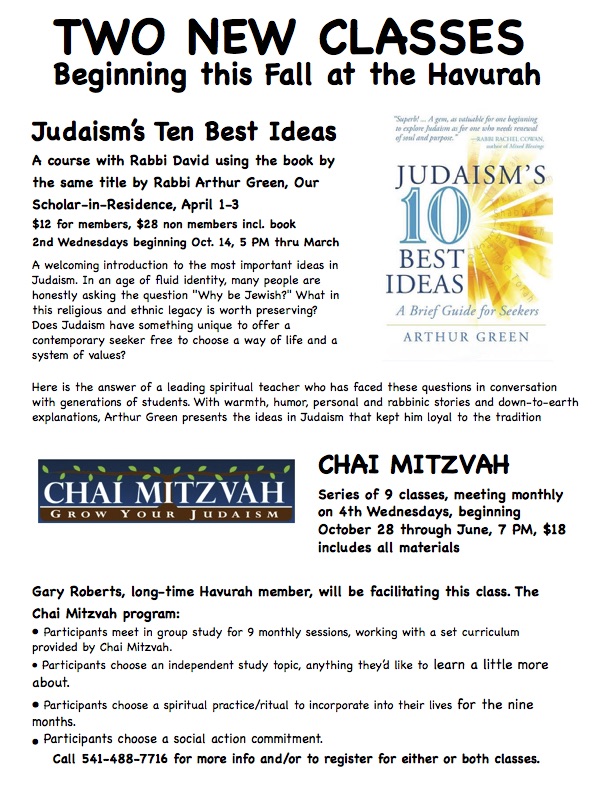 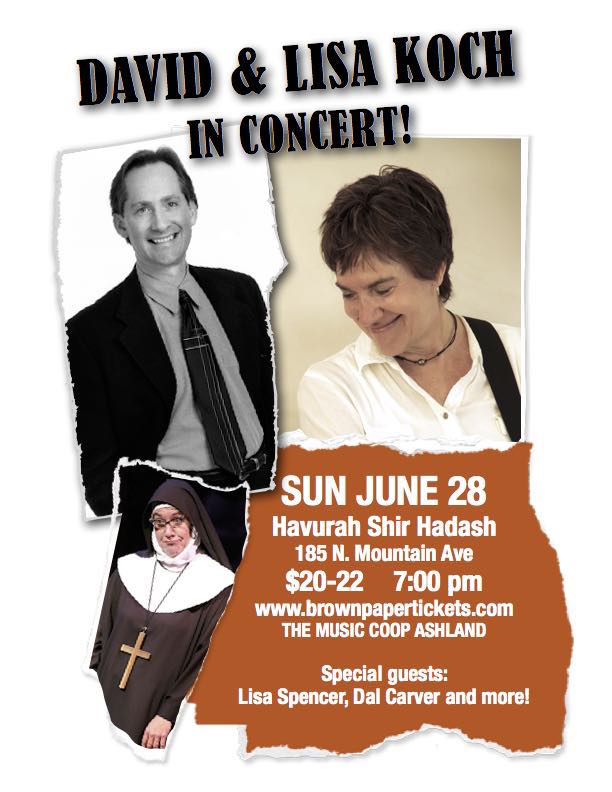 Wacky Seattle singer/comedian Lisa Koch and her talented musician/actor brother David return to their hometown for a night of demented songs and stellar harmonies.  They will be joined by special guests Lisa Spencer, Dal Carver, and other musical pals.

Lisa has co-written such warped cabaret shows as “The Carpeters: Uncomfortably Close To You” (with brother David), “Deja Poo” and “Ham for the Holidays:  Close Encounters of the Pork Rind”.  She has appeared in two one-woman shows at Oregon Cabaret Theatre, composed Off-Broadway musical “27, Rue de Fleurus”, appeared on LOGO, and actually had one of her songs sampled by Jay-Z.

“Hearing Seattle’s Lisa Koch is one of life’s wickedest pleasures… her brand of absurd confessional comedy is clearly resonating with millions of fans.”  –Curve Magazine

On Sunday night, June 1,2014  we roasted, toasted and honored our beloved Rabbi David Zaslow in celebration of his 20 years of leadership at Havurah Shir Hadash. CLICK HERE to see just what a wonderful evening it was! Just click on the first photo to scroll through the album in full size.

As Havurah members and friends arrived, the shock on their faces was, let’s say, remarkable! The Havurah was utterly, completely, unrecognizably transformed into a dramatic, elegant nightclub. Cocktails and champagne flowed, great food was served and the Paul Shmeling band warmed us with fine jazz.

Hal Dresner set the tone for the evening. Lisa and David Koch roasted Reb David in three wickedly funny comedic skits complete with music and original lyrics. Paula Flowers and David Gabriel sang “This Rabbi Makes You Like the Jews” and had old friends and Havurahniks singing the chorus all together. Jan and Marcia Chaiken were hilarious as George Burns and Gracie Allen. Jazz pianist Patty McCoy got a standing ovation for her beautiful rendition of “Somewhere Over the Rainbow.” Devorah and Ayala told the story of Reb Dovid of Zaslov trying to interpret an ancient teaching that turned out to be a recipe for kreplach. Bruce Morris and Maggidah Cassandra Sagan came all the way from P’nai Or in Portland to imitate Rabbi David leading a Bar Mitzvah. Ron Burgess got the County Sheriff (yes, the REAL County Sheriff) to come and pretend to arrest the Rabbi…for alleged prior offenses from his early days in Ashland! 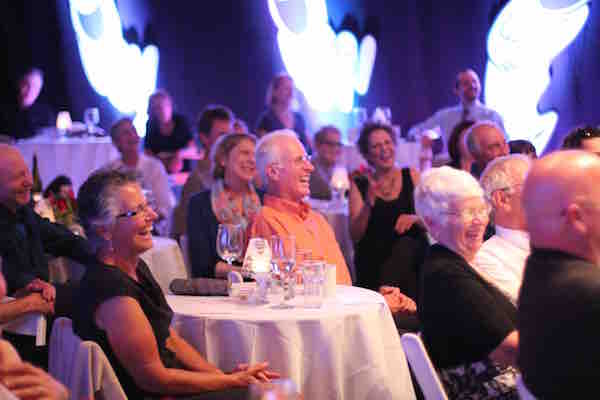