On Sunday, December 25 at 7:30 PM Temple Emek Shalom and the Havurah Synagogue join in presenting a solo blues concert with Lazer Lloyd, Putting Soul into the Season.

Lazer Lloyd is a genre-defying artist whose self-titled new CD on Lots of Love Records topped the blues-rock charts through the summer of 2015 bringing comparisons to Santana at his best from Elmore Magazine’s sage Jim Hynes and “Muddy Waters on electric steroids” from veteran Canadian music & arts journalist, Bob Mersereau. 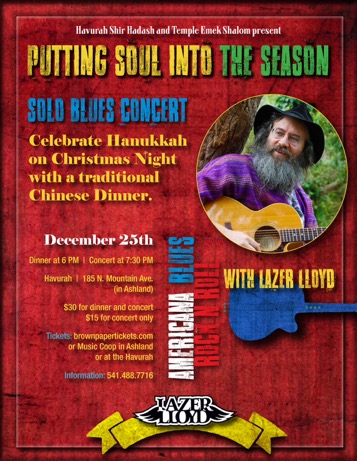 Whether smoking hot or meditative, Lloyd’s unique style is forged through the white-hot furnace of his three insatiable loves: songwriting, guitar, and communicating with the audience. At the core Lazer says, “Americana…roots rock, blues, folk, it’s real; it’s about everyone’s life story and it heals.”

The trailblazing singer/songwriter’s live shows and his brand of blues and psychedelic roots rock are legendary in his home base Israel. He is now blowing down the doors of clubs and festivals worldwide. Major influences include BB King, Bob Dylan, Jimi Hendrix, Stevie Ray Vaughn, Johnny Winter, Santana, and Middle Eastern oud. 2q1

Rabbi David says, “When it comes to blues in the style of BB King, Albert King, and Buddy Guy then Lazer Lloyd is sure to knock your sox off. He’s the real deal. The laser beam of the blues. A solo concert not to be missed.”

For many years Jewish people have had a tradition of eating Chinese food on Christmas Day, since usually those are the only restaurants open for business. In keeping with that tradition, a Chinese dinner will be offered before the concert, for those wishing to partake of both, catered by Yuan Yuan of Ashland.

Tickets are $15 for the concert or $30 including dinner and are available online at  http://www.brownpapertickets.com/event/2720495

or at the Music Coop, 268 E. Main St. in Ashland. Space is limited. The Havurah is located at 185 N Mountain Ave. in Ashland. For more information call 541-488-7716 or visit www.havurahshirhadash.org.

“It’s one thing to be a student of the blues, which began as gospel, and it’s another to be able to release the emotion to make it authentic. Lazer Lloyd does both.” Tim Parsons, Editor “Tahoe On Stage”