Seattle singer/comedian Lisa Koch returns to her hometown on Saturday, November 3, 7:30 PM for a night of quirky songs, nutty nuns, and lots of laughs.

Daft. Demented. #SNORT.  Picture Tina Fey meets Bette Midler with Joan Jett guitar chops… and you’ve got Seattle’s Lisa Koch. An irreverent singer/comedian, Koch (“Coke”) is a deliciously twisted mix of comedy, theater, and tunes.  With 5 solo recordings, she is an alumnus of loony sketch comedy duo, Dos Fallopia (My Breasts are Out of Control, Ham for the Holidays), and cult quartet Venus Envy (I’ll Be A Homo for Xmas). She has shared the stage with Steve Martin, Janis Ian, Lily Tomlin, The Indigo Girls, Kate Clinton, and more.  Lisa has co-written such warped shows as “The Carpeters: Uncomfortably Close To You,” “Two’s Company, I’m a Crowd,” and “Ham for the Holidays: The Hamchurian Candidate.” Koch has been featured on Olivia and LOGO, is the composer of Off-Broadway musical “27, Rue de Fleurus”, and is proud to report that one of her songs has actually been sampled by Jay-Z.  Lisa brings to the stage her guitar, her clever songs, and her musings on being a woman… from middle age to mammograms to singing vulvas.

Koch grew up in Ashland and started her musical career in the Rogue Valley with brother David, singing at the Mark Antony Hotel and the Hungry Woodsman. Lisa later joined rock band In Flight, and toured with local singer Lisa Spencer.  She was a regular performer at popular Ashland club Jazmin’s. She also debuted two of her one-woman shows at Oregon Cabaret Theatre.

“Hearing Seattle’s Lisa Koch is one of life’s wickedest pleasures… her brand of absurd confessional comedy is clearly resonating with millions of fans.”  — Curve Magazine

“Be prepared to have your hair blown back by the musical comedy force that is Lisa Koch.”

“None of this would work so well if Koch weren’t such a dandy singer, guitarist and song-dismantler. There’s almost nothing she can’t do to subvert a popular classic…” — Seattle Times 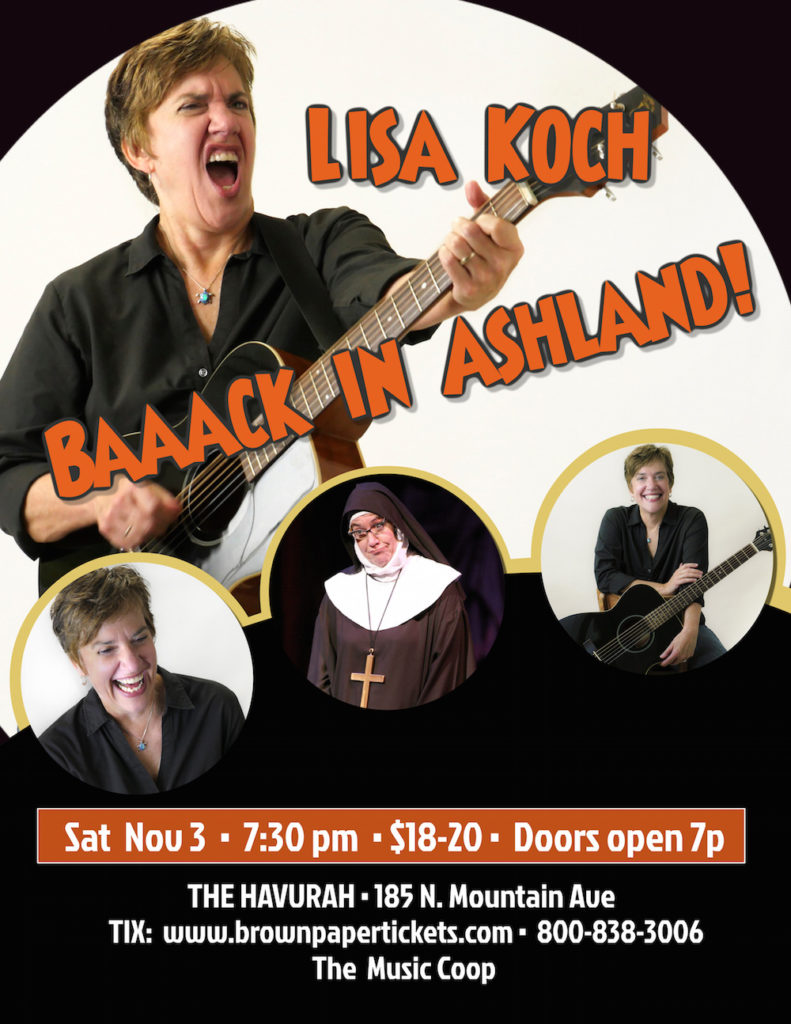