Message from the Bride

Stage fright is an understatement for the days before my “wedding” this past May. Rabbi David promised a fun time. I wasn’t convinced. After agreeing to renew my vows, I became nervous, and then nervouser. The Rabbi waved his hand and said, “You’ll see, it will be fine”. Oy veh! After the rehearsal with Susanna, our daughter, and Rabbi D. I regretted it all. But like all weddings, the invitations were out, Iris had made a zillion phone calls and Stan ignored my qualms. 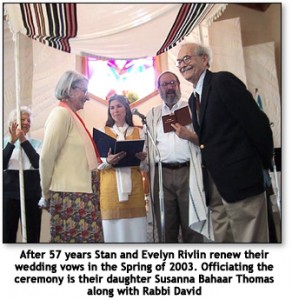 When I walked into the Havurah, I went into the Rabbi’s office to change my shoes. Susanna and David were centering with a prayer and said “sit down. “I must change my shoes” I said. He said, “sit down”! The three of us created a circle of hands, took a few deep breaths, and meditated only a few minutes. I became calm, I was calm. When I walked out I sat in the back of the sanctuary, quietly.( no comments, please) The guitar began, I received the “nod” to begin. Everything went well. I did have fun.

Several Havurahniks asked me why we agreed to celebrate the odd anniversary year of 57.

Simply, don’t put of ‘til tomorrow what should be done today, to put aside all the differences that occur in over a half a century and to remember why we married in the first place. To be honest, before the next major “disagreement” was a thought. Some also asked what the secret is. I can only answer for myself, perseverance. Wouldn’t it be wonderful to begin a Havurah tradition? This could be a frequent happening. Who will be next?