On Sunday night, June 1, we roasted, toasted and honored our beloved Rabbi David Zaslow in celebration of his 20 years of leadership at Havurah Shir Hadash.

As Havurah members and friends arrived, the shock on their faces was, let’s say, remarkable! The Havurah was utterly, completely, unrecognizably transformed into a dramatic, elegant nightclub. Cocktails and champagne flowed, great food was served and the Paul Schmeling band warmed us with fine jazz. 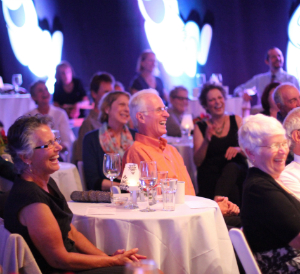 Hal Dresner set the tone for the evening. Lisa and David Koch roasted Reb David in three wickedly funny comedic skits complete with music and original lyrics. Paula Flowers and David Gabriel sang “This Rabbi Makes You Like the Jews” and had old friends and Havurahniks singing the chorus all together. Jan and Marcia Chaiken were hilarious as George Burns and Gracie Allen.

Jazz pianist Patty McCoy got a standing ovation for her beautiful rendition of “Somewhere Over the Rainbow.” Devorah and Ayala told the story of Reb Dovid of Zaslov trying to interpret an ancient teaching that turned out to be a recipe for kreplach. Bruce Morris and Maggidah Cassandra Sagan came all the way from P’nai Or in Portland to imitate Rabbi David leading a Bar Mitzvah. Ron Burgess got the County Sheriff (yes, the REAL County Sheriff) to come and pretend to arrest the Rabbi…for alleged prior offenses from his early days in Ashland! 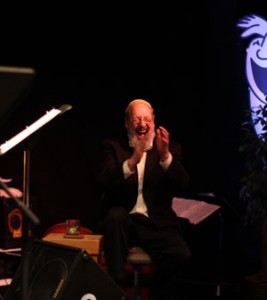